Whats going on in Finland? 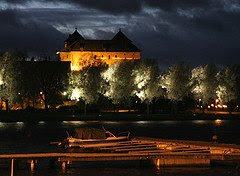 Finnish high-school students rarely get more than a half-hour of homework a night. Their schools have no uniforms, no honor societies, no valedictorians, no tardy bells and no classes for the gifted. There is little standardized testing, few parents agonize over college and kids don't start school until age 7.

Yet by one international measure, the 2006 PISA, Finnish teenagers are among the smartest in the world. In contrast, American teens finished among the world's C students even as U.S. educators piled on more homework, standards, testing and rules. Finnish youth, like their U.S. counterparts, also waste hours online. They dye their hair, love sarcasm and listen to rap and heavy metal. But by ninth grade they're way ahead in math, science and reading -- on track to keeping Finns among the world's most productive workers.

So what makes Finns so smart?
One explanation might be that Finnish school have a relaxed environment and back-to-basics approach. Teachers and students address each other by first names. And about the only classroom rules are no cellphones, no iPods and no hats. The country spends about $7,500 per year per student (vs $8,700 in the U.S.) and its model school, has no sports teams, marching bands or prom.

Another reason Finnish students are so successful is that their teachers must hold master's degrees, and the profession is highly competitive: More than 40 people may apply for a single teaching job. While the salaries are similar to those found in the U.S., Finnish teachers generally have more freedom. Each teacher picks their own books and customizes their lessons as they shape students to national standards. "In most countries, education feels like a car factory. In Finland, the teachers are the entrepreneurs," says Mr. Schleicher, of the Paris-based OECD, which began the international student test in 2000.

A third cause of the Finns' success is their love of reading. Parents of newborns receive a government-paid gift pack that includes a picture book. Some libraries are attached to shopping malls, and a book bus travels to remote neighborhoods to allow every access to reading materials.

Lastly, Finn students are more self-reliant. While many U.S. parents fuss over accompanying their children to and from school as well as at playtimes and outings, young Finns do much more on their own. At the Ymmersta School in a nearby Helsinki suburb, some first-grade students trudge to school through a stand of evergreens in near darkness. At lunch, they pick out their own meals and carry the trays to lunch tables. There is no Internet filter in the school library. They can walk in their socks during class, but at home even the very young are expected to lace up their own skates or put on their own skis.