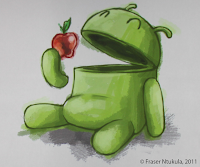 In Germany Motorola won the latest in a series of patent suits with Apple. The result of this suit mean that Apple must disable push notifications on Mail services on iOS devices via MobileMe or iCloud. Last week, Apple won a different suit which caused Motorola to stop selling certain models until they change the "slide to unlock" touchsreen unlocking feature. Recently Apple aggressive legal strategy has been begun to backfire as numerous competitors have decided to fight fire with fire.