The Efficiency Of Entertainment

Studies have shown that the average monthly cost of entertainment for people in the United States is $58. While this metric is useful in determining what people are willing to spend it doesn't show what is best to spend your money on. For that we need to create a cost per hour metric.

To create a cost per hour metric the following variables were considered. First, does the entertainment require additional equipment to access. For instance, renting a movie may cost only $2, while attending the same movie at the theater might be closer to $10. In its simplest form this would mean that attending a movie in the theater would cost 5x the amount that it would at home. However, this is not the complete picture. Renting a movie means that you would also need a TV and DVD player in order to watch. On the other hand your couch and dwelling was not considered as part of the cost because it is assumed you would need those with or without your chosen form of entertainment. Lastly, it is assumed that these larger expenses cost would last longer than a month. With that being said here are the numbers from some of the more popular forms of entertainment: 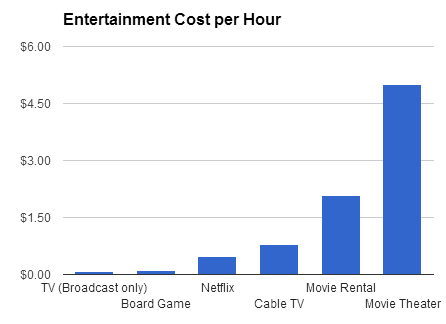